Mr Desmond Tiny, sometimes called Mr Des Tiny or Mr Destiny, is a key character in the Saga of Darren Shan. He loves chaos and commonly plants ideas into people's heads to make them cause world wide chaos and war and destruction. He sometimes asks people to call him Des, which makes him Des Tiny, or Destiny.

Father of Hibernius Tall, Lady Evanna, Darren Shan, and Steve (Leopard) Leonard. Also the creator of the Little People, he is known to have future predicting abilities, time traveling and other magical powers. He can also control dragons. He is believed to be the most powerful being in the world, and is also believed to be immortal. He can travel through time, and likes to meddle with it. In Sons Of Destiny, Desmond possess many original objects designed by famous people such as the Mona Lisa painting by Leonardo da Vinci. He collects many things from mankind except books due to his lack of interest in reading (mainly fiction). He always wants to see a good fight and no peace. It is also supposed that his own cunning got the best of him when he agreed to allow Lady Evanna to fish Darren out of the Lake of Souls, ultimately causing his Lord of the Shadows' future to become nonexistent. He also has this heart shaped watch.

He has short white hair, thick glasses and pudgy face, with a warm but mocking smile. He wears a shabby yellow suit and a pair of green wellington boots. He has six toes, with webbed feet, carries a heart shaped watch, and has six cat-like claws on each foot.

He is supposed to have helped Alan Morris, one of Darren's friends in school, to clone a dormant dinosaur egg and create the dragons. The dragons are kept under control by the worlds' authorities but finally they take over the earth starting the Age of Dragons, from which Mr. Tiny collects the souls from the Lake of Souls to make his Little People.

The vampires came into being by themselves. They were originally able to have children and were not affected by sunlight. Mr. Tiny went back in time and changed that, making them prisoners of the night. Six hundred years before the start of Cirque Du Freak, the 'vampaneze' broke away from the vampire clan and formed a new group because they believed they should kill when they feed, while the vampires did not.

Mr. Tiny is one of the Creatures of Chaos and has to obey the laws of the universe otherwise he will set his elder family and his brothers and sisters, the Hounds of Chaos, free on the world and they will cause misery throughout the world.

Darren Shan and Steve Leonard, friends since childhood, enemies since their later teenage years, are both sons of Desmond Tiny. Mr. Tiny is said to have imprinted himself on their mothers, without them knowing. Darren and Steve are therefore half-brothers. 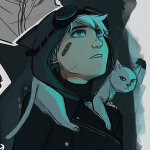